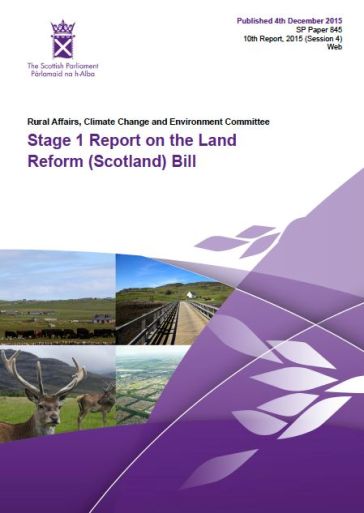 The Scottish Parliament’s Rural Affairs, Climate Change and Environment (RACCE) Committee published its Stage 1 Report on the Land Reform (Scotland) Bill last week.  The Report has been much anticipated because of its potential influence in shaping amendments to the Bill during Stages 2 and 3 of the legislative process.   All the more so given recent rumblings of discontent (not least from within the SNP’s own membership) that the Government’s land reform proposals are nowhere near radical enough to match its rhetoric on the issue. Others, less favourably disposed towards land reform, will doubtless have been hoping for a report that helps further dilute whatever radical intent may be detectable within the current Bill.

To its credit, the Committee’s Report does not play to either of these galleries.

Instead, it deploys measured language and robust analysis to carefully map out the Committee’s views and recommendations regarding the Bill as it stands.

In essence the Committee appears to find much to support in terms of the Bill’s underlying principles and content. It nevertheless has significant concerns about a lack of detail regarding key provisions (and the negative implications of that for effective Parliamentary scrutiny) in parts of the Bill.   The Committee also has reservations about the potential effectiveness of specific provisions, as currently drafted, in achieving intended policy objectives in relation to transparency of land ownership; removal of exemptions from non-domestic rates; and aspects of agricultural holdings.

The Committee seems warm towards provisions designed to ‘lock-in’ land reform as a cross-cutting and on-going feature of public policy in Scotland. Thus it supports establishing a land rights and responsibilities statement (Part 1) while recommending that it be differentiated from a statement of Ministers’ policy objectives for land reform.   Similarly, the proposal for a Land Commission (not a Land Reform Commission) (Part 2) also passes muster, although more importance is placed on recruiting Commissioners equipped with integrity, principle and vision rather than sectoral expertise.

The Committee is equally supportive of engaging communities in decisions relating to land (Part 4). However, it wants more detail in the Bill’s provisions clarifying why such engagement is required, circumstances and issues on which it would be reasonable to engage, and possible consequences for landowners of not following the community engagement guidance to be issued by Government.

Provisions to introduce a new Community Right to Buy to further sustainable development (Part 5) are broadly welcomed. However, that welcome comes with caveats. One is that the new right should not apply to productively managed agricultural land. Another is that the thresholds to be met before the Right to Buy could be triggered are unduly high to make it a viable option for communities to use.

The Committee has clearly lost patience with the glacial pace of progress in achieving sustainable deer management, the focus of Part 8 of the Bill. The Report considers it “imperative” that the Scottish Government and SNH publish a full review of management arrangements in 2016. The Committee also calls on the Government to consider amending Part 8 of the Bill to include further statutory measures that could be enacted soon after conclusion of that review if necessary.

Other elements of the Bill need considerable work according to the Report.   It states that provisions in Part 3 “are not likely to go far enough in delivering the desired increased transparency about those who own, control and benefit from the land” and makes various recommendations to address that shortfall in transparency. These include requiring:

“ – those who wish to buy land and register title in Scotland to be registered EU entities, and requiring current non-EU registered owners to register within 5 years of the commencement of the provision;

– those who wish to buy land and register title in Scotland to provide a named contact point in Scotland;

– those who wish to buy land and register title in Scotland to clearly identify those who will control the land and those who may benefit from that ownership and control;

– any other appropriate information that could reasonably be needed as part of the registration process and which would improve transparency and accountability.”

There is also scepticism on the Committee’s part regarding reintroduction of non-domestic rates for shootings and deer forests. The Report states:

“The Committee believes, with one exception [Alex Fergusson] that it may be appropriate to tax larger, profitable, commercial sporting shooting enterprises if a clear case can be made that it would be economically, socially and environmentally appropriate to do so. However, based on the available information, the Committee believes the case for change has not yet been made.”

Part 10 of the Bill focuses on agricultural holdings and it is here that a political dividing line within the Committee is most obviously laid bare. The majority of the Committee supports some of the provisions in Part 10. A notable exception being Alex Fergusson, who dissented from the comments made in the Report regarding that entire Part of the Bill.

The remainder of the Committee supports removing the need for Agricultural Holdings (Scotland) Act 1991 tenants to register a right to buy interest (Chapter 2); forcing a sale where a landlord is in breach of their lease (Chapter 3); introducing an amnesty for tenant‘s improvements (Chapter 6); and tightening the rules where landlords wish to make improvements (Chapter 7).

However, the Committee (including, one can safely assume, Mr Fergusson) is unconvinced that Part 10 can deliver all of its stated objectives relating to maintaining or increasing the amount of land available to let; strengthening the rights of tenants and making it easier for them to invest in their tenancies; protecting the rights of landlords; and ensuring continued confidence in the sector for land to be let.

In particular, the Committee has concerns about provisions relating to the process of converting secure 1991 Act tenancies into proposed Modern Limited Duration Tenancies (a proposal described in the Report as having received a “lukewarm response” in evidence sessions) and with regard to the proposed new rent review process. It further acknowledges that giving 1991 Act tenants a right to buy remains a “live and contentious issue” while urging the Scottish Government to consider ways to resolve that issue including giving these tenants a right to buy in certain circumstances.

The type of Parliamentary scrutiny that has resulted in the RACCE Committee’s Report is about as far from the turbo-charged rhetoric surrounding much of the land reform debate as it’s possible to get. That scrutiny and its attendant Report have provided a valuable public service in anchoring the Bill to land reform as ‘the art of the possible’. It does this by highlighting key areas where further detailed work is needed to make the Bill more effective, stressing the importance of the Human Rights context, and confirming the adequacy of existing sustainable development definitions in relation to the legislation. At the same time the Report offers encouragement to those favouring a more radical Bill by recommending that landowning entities be EU registered and a possible Right to Buy for tenant farmers in particular circumstances.

Most importantly of all, the Report now provides a vital platform for developing legislation that may yet match the RACCE Committee’s call for a Bill that is “bold in its ambition and clear in its purpose”. Whether that does indeed happen will become much clearer when the focus shifts to Stages 2 and 3 of its legislative progress.