Back in April 2013 Johann Lamont used her Scottish Labour conference speech to commit the party to extending the ‘community right to buy’ land to include circumstances where the landowner is not a willing seller “if it is in the public interest”.

At the time I speculated on this blog as to whether that upping of the land reform ante would bring the ‘Land Question’ into the crosshairs of an independence referendum debate still in the early stages of its marathon duration.

Nationally at least, the issue was drowned out by the white noise of claim and counter-claim from both sides of the debate. Even ‘Scotland’s Future’, the Scottish Government’s blueprint for an independent Scotland seemed remarkably coy on the issue. Here – in total – is what it had to say about land reform:

“land and communities. The Scottish Government is already committed to empowering communities and local government. Our action around community renewables  and land reform will empower communities by helping them acquire assets. This is a commitment that was strengthened by the First Minister’s announcement in June 2013 of  the Scottish Government’s target of one million acres of Scotland’s land in community ownership by 2020. Our reviews of land reform and tenant farming are part of building a fairer society for which independence is required: for example, taxation powers are needed to encourage land to be made available for new tenant farmers and address wider land reform.”

In fact virtually all of the 62 recommendations contained in the Land Reform Review Group’s (LRRG) final report, ‘The Land of Scotland and the Common Good’, can be implemented under the current devolution arrangement.  But let that pass.  Now that some light is gradually replacing the heat of the referendum campaign a key question is where land reform goes next as an issue of public policy in Scotland.

It’s doubtless of scant consolation to Yes voters, but there’s a plausible argument to be made that – at least in the short term – the referendum result provides a better prospect for land reform gaining the sort of sustained policy traction that has been glaringly absent for most of the last decade. At the very least it means that some able civil servants currently shaping the Scottish Government’s detailed response to the LRRG’s report are unlikely to be diverted to other duties; not a guarantee had a vote for independence called all hands to the negotiating pump.

Then there’s the slowly crystallising response of Scotland’s political parties themselves to consider. There was much talk before September 18th within the Yes camp about Scotland’s apparently distinctive left-of-centre, communitarian values. There’s now increasingly loud chatter from the more perceptive voices on both sides of the independence debate about the need for progressive social change in Scotland within the confines of a recalibrated devolution settlement.

Might land reform have a significant role to play in that process?

Johann Lamont certainly seems to think so. She had this to say on the issue in her speech during the Referendum Debate in Parliament on September 23rd:

“I think that one area on which people can agree is land reform, which is part of a radical agenda for Labour. If we are to see social change in our communities, land reform can deliver it. There is a will in this Parliament to change the concentrated pattern of land ownership across Scotland. We have received the recommendations of the land reform review group and between now and 2016 we can and must look at how we enact them. We must show boldness in introducing radical changes, and we must address the fact that 423 people own 50 per cent of privately owned land in Scotland. Devolution has taken us far down the road of land reform, but it is a journey that is not yet complete. This is about political will, and I will work with people right across the chamber who are willing to do that work”

One relatively early test of that Parliamentary will relates to the ‘Community Right to Buy’ provisions contained in the Community Empowerment Bill currently making its way through Parliament. Specifically, whether the proposed extended ‘right to buy’ to include circumstances where there is not a willing seller can be implemented in practice. The same goes for the existing unworkable ‘Crofting Community Right to Buy’, consideration of which has belatedly been tacked on to the Bill.   A second legislative indicator of political intent relates to the contents of the forthcoming Land Reform Bill, also due to be passed in the current session of Parliament.

Of most obvious interest when taking the temperature of this nascent new politics is the mood of the governing party regarding land reform; perhaps not least to the SNP’s new members who have joined the party in droves since the referendum result. A debate on land reform at its party conference in November – together with a clear commitment that the Government is intent on developing a national land policy and associated programme of measures – would further help instil confidence that the SNP is serious about the issue.

It’s certainly true that when interviewed for the BBC Scotland documentary ‘The Men Who Own Scotland’, broadcast in January 2014, Paul Wheelhouse, the Environment Minister, seemed been pretty unequivocal on the subject, stating:

“If we don’t see a fairer distribution of land then, as a Parliament, we will have failed the people of Scotland”.

Just a couple of days ago this tweet by Richard Lochhead, Cabinet Secretary for Environment, Food & Rural Affairs, offered a potentially revealing hint of current thinking inside Government. 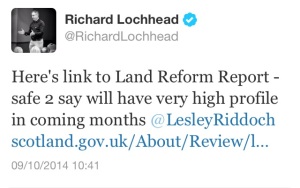 A “very high profile” for the LRRG’s report in Government, and all that might entail, will doubtless be an unappetising prospect for Scotland’s landed elite. For others it offers encouragement that there may indeed be a gathering consensus to place land reform to the fore of a more progressive politics in post-referendum Scotland. For that to happen political rhetoric must be matched by cross-party support for real and radical action in the coming months.

1 thought on “Land Reform after the Independence Referendum”